We All Need a Boost 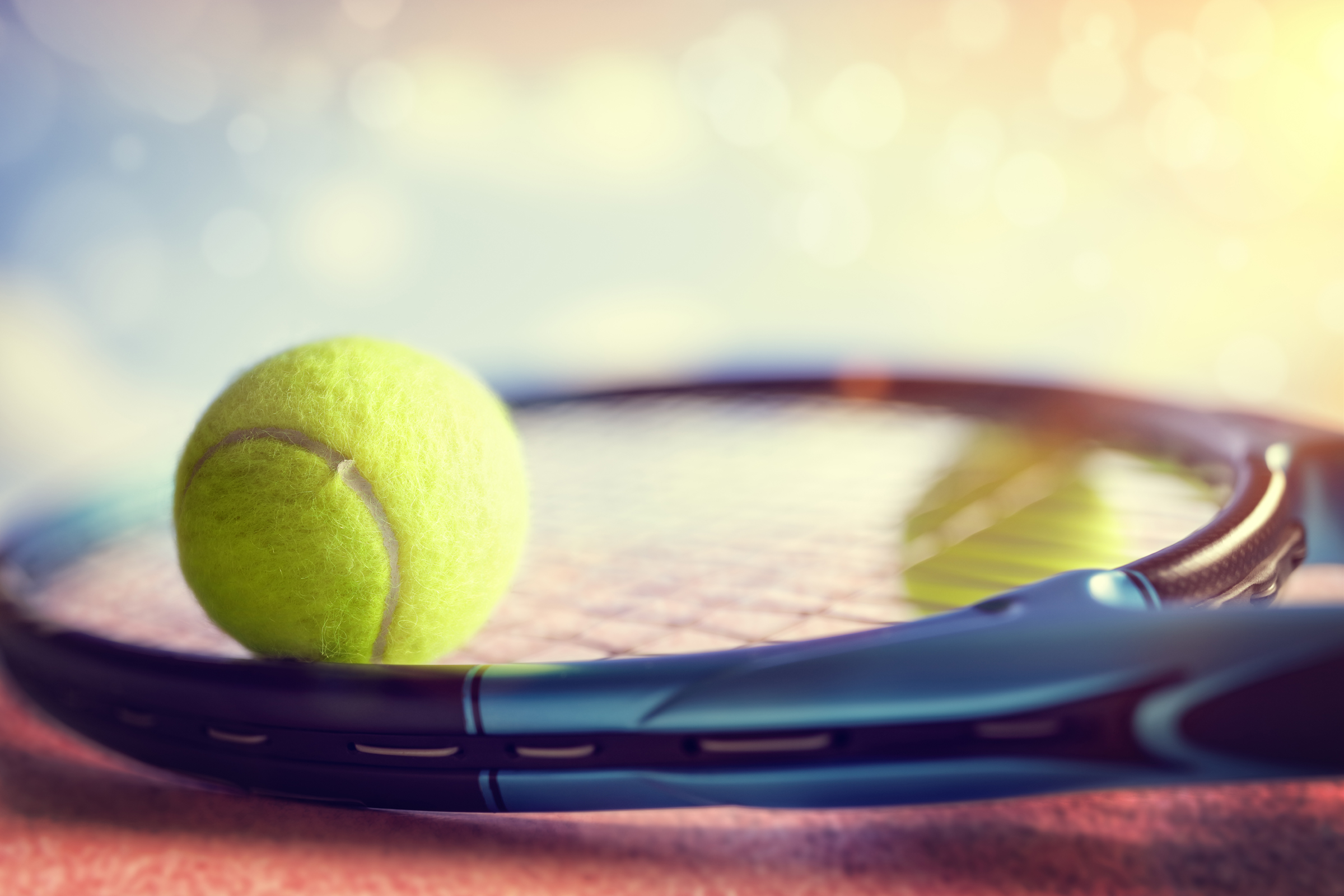 “Everything about the coronavirus sucks”.

That was the mumbling of my 9-year old son last Sunday night as we sat on a bench at our local tennis court. While we might not all appreciate his choice of words, I think all of humankind shares his sentiment. There haven’t been too many times in history where the world has felt as frightened and isolated as this past month.

Tennis is one of my son’s favorite activities, and the coronavirus’ impact on it has been severe. We had plans since Christmas to attend his first major professional tennis tournament in Palm Springs over spring break, where he could see and autograph-hunt his favorite players. Canceled. The club where he practiced three times a week closed. And finally, earlier Sunday night I’d received an e-mail from our community association telling us that, effective Monday, the neighborhood tennis courts would be locked to deter people from congregating. His sport was literally being shut down, so that night’s tennis session was the last we’d likely have for a while.

His game last night was terrible, and he knew it. Shots that he usually makes with ease sailed wide. He couldn’t get a backhand over the net. He dropped his racquet to the ground. He yelled in disgust. After he intentionally launched a ball over the fence, I forced him to sit. After a few minutes of silence, it was clear his mind wasn’t on tennis: “Dad”, he said sniffling, “I can’t see my friends, I can’t play tennis, I can’t take piano lessons (his second love); the coronavirus has ruined my life. It hurts and I hate it!”

More on that later…but first some financial thoughts:

What’s Happened in The Markets?

Many investors would likely echo the thoughts of my son as it relates to coronavirus and the global stock market. In less than one month, the market has fallen dramatically, quickly turning remarkably strong longer-term returns into mediocre (albeit still positive) ones1:

We know that the stock always has been, and likely will always be, a volatile place that has a remarkable way of tempting us to make decisions based on feelings of fear or greed. While it’s impossible to ignore your emotions completely, we think one of the best ways to temper them is to re-focus away from the absolute level of recent returns, and turn your attention to assessing what impact, if any, those recent gyrations have had on financial plans we created with you and your family. Have recent returns been so outside the norm that your plan is now “out the window”? The short answer to that question is “no”: As dramatic as the last month has felt, the returns experienced over the past 12 months are well within the range of annual outcomes that are built into our plans. In short, while markets like these are scary, stressful, and hopefully infrequent in nature, well-constructed plans are built with the expectation that periods like this can and will happen.

Is It All Different This Time?

The roughly 30% decline in the global stock market over the past month has been frighteningly swift. But it’s important to dig into our memory banks and remember that it’s not the first time the stock market has fallen by 30% or more. In fact, we need only go back 12 years to find the last time2:

Data Source: “How Long Does It Take to Make Your Money Back After a Bear Market?” www.awealthofcommonsense.com, March 13, 2020.

Each major stock market drawdown has occurred under its own unusual circumstances. Each one has brought our country and the world into a feeling of being in unchartered territory. Despite the unusual context of each crisis, we can see some commonalities in how markets have performed during and after them: 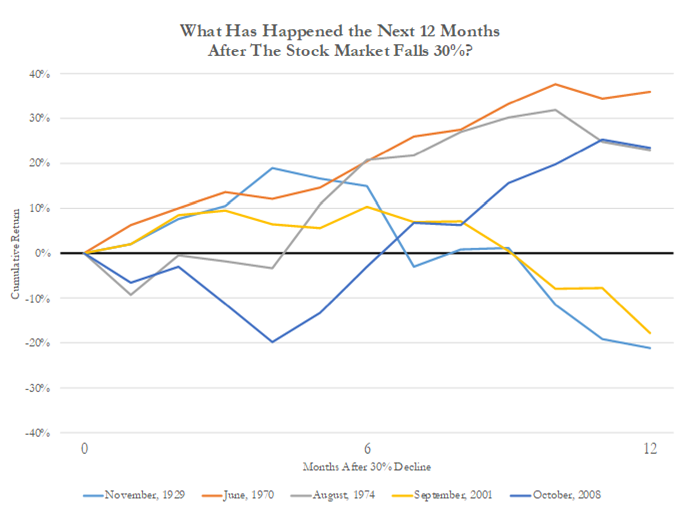 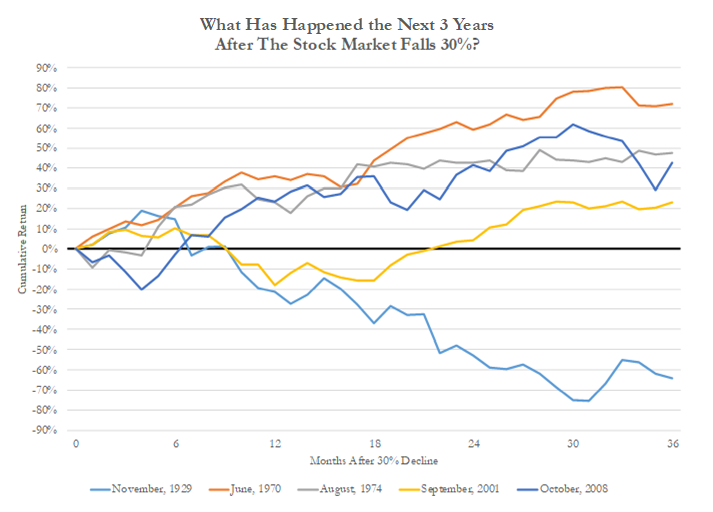 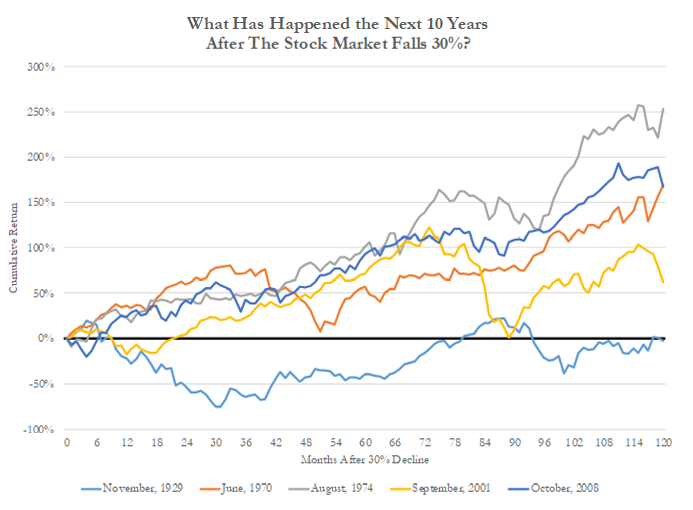 Data Source for three charts above : Dimensional Returns 3.0 Software.  Note:  1987 decline is not shown, as these graphs are based on month-end returns and 1987 was not a 30% decline on a month-end to month-end basis.

How Will We Know When We’ve Hit Rock Bottom?

We won’t.  No one will know when we’ve hit bottom until well after the fact.  No act of government, no technical market indicator, no scientific discovery will be the definitive signal that the coast is clear in the markets.  March 9, 2009 was the bottom of the last deep decline4, but at that point in time the situation around the world was arguably at its bleakest.  Here are some media quotes from and about the day that turned out to be the best one in the past two decades to buy stocks:

“For Dow, Another 12-Year Low” (CNN.com, March 9, 2009)
“We’re seeing more of the same,” said John Buckingham, chief investment officer at Al Frank Asset Management. “With an absence of good news, the path of least resistance is down…. right now, every rally attempt is being met with selling.””

“Valuations are reasonably attractive outside of financials, but most investors are in defensive mode,” said Thomas Nyheim, portfolio manager at Christiana Bank & Trust Company. “They’ve seen too many losses and are sitting on the sidelines.”

“How low can stocks go?” That was the ominous query topping The Wall Street Journal’s Money and Investing section on March 9, 2009.

It wasn’t an idle question. The Dow was on its fourth straight week of losses, while the broader S&P 500 was below 700 for the first time in 13 years. Goldman Sachs put out a research report that warned the S&P could fall as low as 400.

A year later, we know that March 9 was the bottom of a months-long financial panic that wiped away trillions of dollars in assets. But on what now appears to have been the best buying opportunity of a generation, many only wondered how much lower the markets would tumble.

Everywhere you turned on the March day, it looked like the economy was ripping apart at the seams. Billionaire T. Boone Pickens had just announced he was pulling back his plans to build a massive wind farm in Texas because of the lack of investor interest. A managing partner at a hedge fund interviewed by The New York Times was advising well-off clients to buy shotguns to protect themselves against social unrest if the market fell any lower.

Maureen Dowd lamented that General Motors was near bankruptcy and that the President had to deny he was a Socialist. “The only bracing symbol of American strength right now is the image of Michelle Obama’s sculpted biceps,“ she concluded.

Over on Comedy Central Jon Stewart was savaging CNBC for its role for downplaying the severity of the financial crisis with a withering takedown: “If I had only followed CNBC’s advice, I’d have a million dollars today … provided that I’d started with $100 million.“

Taxpayers had recently come into ownership of almost 80% of American International Group. The fact that the American public was paying AIG counterparties like Merrill Lynch and Goldman Sachs full price on the $70 billion worth of derivatives spawned persistent conspiracy theories…

…Financial pundits were telling investors that buy-and-hold investing was dead, and that the only real way to make money in the market in the future would be to strategically time your trades and take your gains whenever you could get them.“

It’s clear that no one at the time thought March 9, 2009 would be “the day”, and that the S&P 500 would rise 6% the following day, 25% the following month, and 69% over the following 12 months. While no one knows if this market’s eventual recovery will start off this steeply, we are confident that investors won’t fully capture it if they don’t stay the course today.

Back to last Sunday night on the tennis court…

While I was annoyed with his antics, I knew I needed to soothe my troubled son. But unlike other times in his life (a broken toy, a bad grade on a test, a disagreement with a friend) this time the words didn’t come easily to me. In fact, I don’t even remember exactly what I said, but we talked for a few minutes on the bench as he stared glumly at his shoes. When I ran out of words, I asked if he wanted to call it a night or go back on the court. Either would have been fine with me at that point. He said he wanted to play.

It was like a new boy had appeared. Forehands whizzed passed me and landed in by inches. He chased down and returned every attempt at a winner that I’d hit. Suddenly there was a smile on his face and a bounce in his step. I made a comment to him about his remarkable turnaround, to which he responded:

“Dad, thanks for the boost. Sometimes I just need a boost”

What he didn’t know was how much of a boost the experience had given me in return. Coronavirus’ impact on my frustrated child had me in unchartered territory; without any magic words, without any precise actions that I knew would work immediately. It seemed destined to be an ugly night, but it all turned on a dime.

I hope this e-mail will give you a little “boost” as well. A boost to have a little more patience, find a little more peace, and to have confidence that these challenging markets will improve. After all, history tells us the markets, just like my night on the tennis court, often seem darkest just before their dawn.