A few months ago, I finally watched “Sully,” the biographical film about Captain Chelsey “Sully” Sullenberger, the U.S. Airways pilot who safely landed a passenger airliner on the Hudson River in 2009. While I was familiar with the story, I didn’t know the intense scrutiny that Sullenberger was put through by the National Transportation Safety Board after the incident. The NTSB’s initial conclusion was that Sully’s actions were reckless, as it believed he could have landed the giant jet at one of two airports instead of putting it down in the river. In the midst of the investigation, as Sully is contemplating the experience and its future ramifications, he renders this memorable quote to his co-pilot:

“I’ve delivered a million passengers over 40 years, but in the end I’m gonna be judged on 208 seconds.”

A few days after watching “Sully,” I heard a replay of a 1995 NPR interview with famous Beatles drummer, Ringo Starr. A particular passage of the interview conducted by Terry Gross grabbed my attention:

GROSS: …That you were a Beatle. So I guess I’d like to get a sense of what it means in your life, if you still feel like that is so much a part of your existence or if that’s something that you’ve really tried to move beyond and away from and…

STARR: Well, I don’t think you can move away from it because, you know, it was only eight years of my life, but it’s the eight years that everybody really associates with. It’s like, you know, it doesn’t matter I’ve made hit records and, you know, I had hit albums and I’m on tour and that. It always comes back to these eight years of being a Beatle. And I think I just have to resign myself to that that that’s what people want to know about.

I hadn’t realized that the entire life of the Beatles as a band had only lasted eight short years. Both Sully and Ringo’s quotes made me think about how our actions during short periods can have a monumental impact on our lives. The 208 seconds after Sully realized his plane was in trouble and the Beatles’ surprisingly short eight years together played unimaginable roles in their respective legacies.

Investing to achieve our financial goals requires an understanding that our decisions during relatively short periods of time can have a huge impact on our wealth. As markets ebb and flow from year to year, many investors think they constantly need to react and ask, “What do I do now? What stocks look good NOW? Should I still own bonds TODAY? What’s the CURRENT outlook for real estate?” But, as Morgan Housel wrote in a thoughtful blog post in 2013,

“…the vast majority of the time, I’ve come to realize, today isn’t that important. It’s just buying and waiting. Most of what matters as a long-term investor is how you behave during the 1% of the time everyone else is losing their cool.”1

It seems the stock market has been relatively tranquil over the past few years. It’s been almost six years since the S&P fell 15% or more, and during that period the index has produced a total return of approximately 117%. While the media would like us to believe this lack of volatility is unusual, it’s actually been quite common over the last few decades. As the chart below shows, we’ve seen three long periods since 1990 where stocks didn’t experience a 15% decline for five or more consecutive years.2 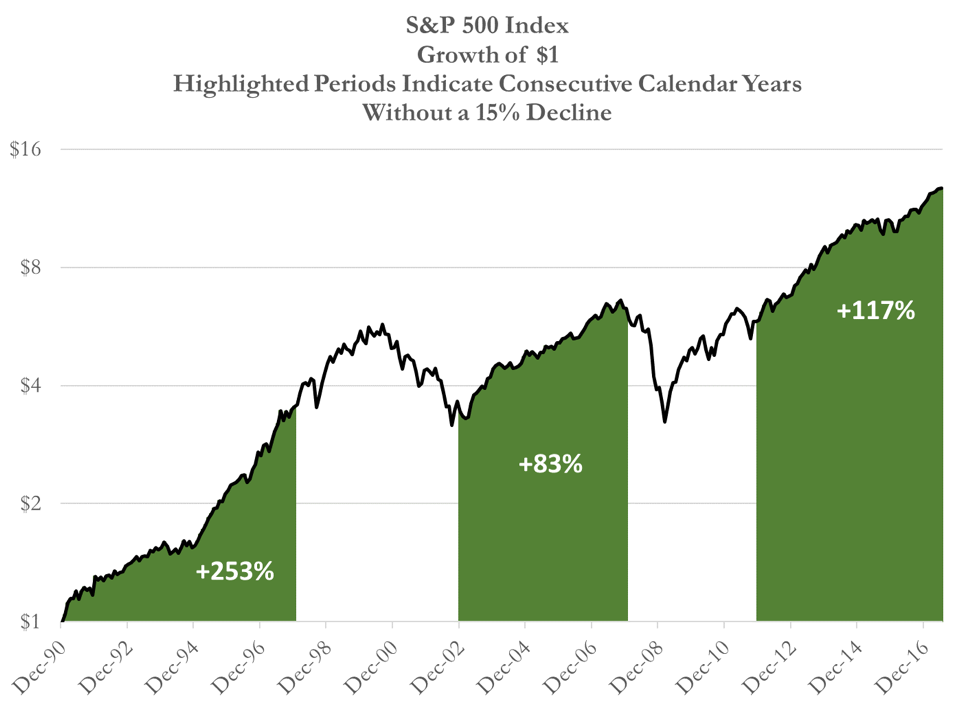 For some, the strong returns over the past 5+ years make it tempting to extrapolate recent results. We are often asked: “The stock market is doing so well lately, why do I even need bonds or other asset classes?” Why not just buy more of what’s been working lately?

Such a bet is dangerous, as history tells us that bull markets are often punctuated by rapid and dramatic declines. Those significant drops in stock values can often leave the “performance chasers” whipsawed, confused and likely poorer than they would have been had they remained disciplined to their specific plans and resisted the temptation to pursue an apparent “trend.”

Instead of thinking about how to change your portfolio in light of the last 5+ years, we believe investors should refer back to the statements of both Housel and Sully. While we shouldn’t lose sight of the gains that “buying and waiting” has produced over the past five years, we must recognize that it’s our behavior when most investors panic that will matter most. Just like Sully, no one knows when our critical “208 seconds” as investors will come, but preparing for how we’ll act when that time arrives is one of the most prudent things an investor can do.

As always, we welcome your questions and comments.

1 “99% of Investing Is Doing Nothing; the Other 1% Will Change Your Life,” The Motley Fool, December 20, 2013.
2 Source:  Dimensional Returns 3.0 software. Returns illustrated do not represent the performance achieved by TFO or any of its advisory clients. Total return figures shown include reinvested dividends.