Like much of the world, I have recently been captivated by two events:  World Cup soccer and the continued rise of the U.S. stock market.  As most know, the World Cup is a truly global spectacle, held once every four years, that unites each country’s citizens.  Even more rare has been the continued upward march of the stock market, with the S&P 500 Index posting its sixth straight quarter of positive returns in the second quarter of 2014.  This is the longest streak without a negative quarterly return since the mid-1990s, when the market went on a 14-quarter tear from 1995 until mid-1998.1

As we might have predicted, the records being set by the U.S. stock market have only heightened the calls to action by so-called “market experts” in the media.  It seems half of them tell us that the market has become wildly overvalued, that a crash is looming, and we should head for the “safety” of cash, while the other half are claiming that it’s still “early in the game” under the belief that the market will rise for years to come.  As an example, on July 14, 2014 Marketwatch.com had competing side-by-side headlines of “Big Money Is Most Bullish since 2011” and “…Signs of a Bubble in a Bizarro Market.”  How should investors respond to the new highs the market has set?  Little did I know some important thoughts could be gleaned from soccer.

The most exciting part of a soccer match is the penalty kick.  The ball is placed 11 meters (36 feet) from the goal, and a player attempts to launch a single kick past the opposing goalie.  The ball takes less than 0.3 seconds to travel that distance and, as result, the goalie has almost no time to react once it is kicked.  Like an investor, he is forced to decide on an action in advance without knowing where the ball is headed.  He can choose to dive left, dive right, or stay in the middle of the goal.  As I watched a number of penalty kick scenarios during the World Cup, I began to wonder if there was any evidence of what the tendencies of the kickers and goalies were.  In fact, there is: 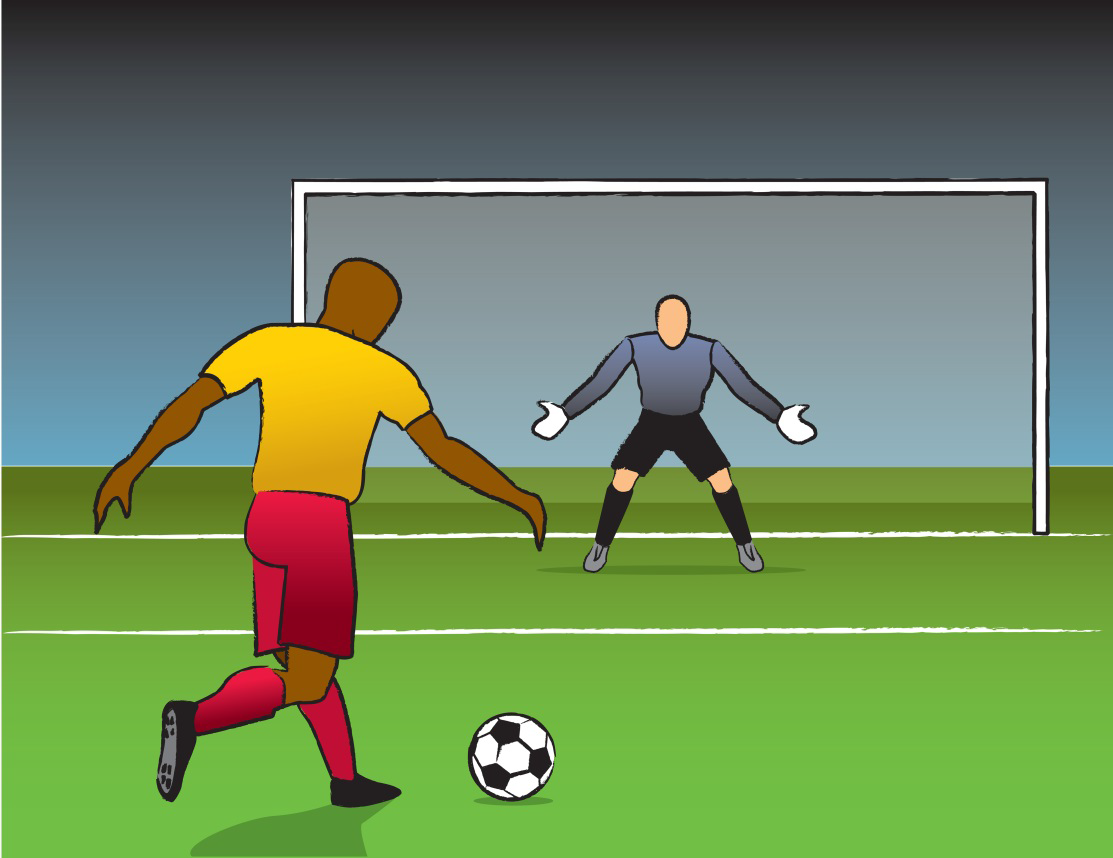 In a 2007 study, a group of academics analyzed 286 penalty kicks from top professional soccer matches1.  They categorized the actions of both the goalies (jump left, jump right or stay centered) and the kickers (kick left, kick right, kick center).  Making a save on a penalty kick is extremely difficult, as evidenced by the fact that they found over 85% of the kicks result in goals.  If the goalie’s decision turns out to be correct, his odds of saving the kick increase significantly, but if he jumps the wrong way, he has no chance of a save.  After evaluating all 286 kicks, the researchers found that the goalie’s chance of successfully making a save was:

It appears obvious that to give himself the best chance of making a save, the goalie should stay in the center of the goal and not jump to either side.  Yet, the most surprising fact of the survey was the actions taken by the goalies in those 286 kicks:

Clearly, goalies have an “action bias.”  They believe that jumping one direction or the other will be advantageous to them, yet the evidence points to the contrary.  Why don’t more goalies follow this academic evidence instead of their “gut”?  The researchers hypothesized that emotions play a big role.  In other words, if the goalie was unsuccessful, he would feel better about allowing the goal (and perhaps so would his team’s coach, owner and fans) if he had taken a dramatic action.  Thus, he would be more apt to keep his job and his self-confidence by jumping rather than standing still, even if the data says that the more passive action had a higher likelihood of success.

Today, and every day, investors are faced with a decision:  No one knows which direction the market will “kick the ball”, but we must choose between taking a dramatic action in either direction (selling stocks now or selling other assets to buy more stocks) and “staying centered” with our current portfolio and plan.

Looking to the forecasters in the media for advice on this decision can be dangerous, as they may often have a different objective than yours.  These forecasters are often rewarded for guessing right on one single kick so that they can claim success and capture eyeballs and assets in the future.  If they guess right on one kick and make a dramatic save, they will be instantly famous and shown on every highlight show.  Even if their repeated guessing ends up failing in the long run, it is unlikely that the media will be there to judge them, as the networks will move on to lauding the next short-term “market expert.”  Alternatively, knowing that the ups and downs of the market equate to a never-ending stream of penalty kicks over your life, you need to find a strategy that is most likely to work over the long term, not just once or twice.

Just as the soccer researchers found, we believe the academic evidence tells us that best investment strategy is to resist the temptation to guess at whether the ball is going left or right and “stay the course” with a well-thought plan based on your specific circumstances.  Staying centered and not reacting dramatically to the market environment might seem frustrating if the ball gets past you next quarter or next year, but we think it’s the right approach for the long run.

There are many historical examples of how staying centered has led to solid investment results, but let’s go back in time to September 1, 2008, two weeks before Lehman Brothers filed for bankruptcy and the Dow Jones Industrial Index fell almost 500 points in a single day.  If you had invested $1 million in the S&P 500 on September 1, 2008, your investment would be worth over $1,700,000 at the most recent quarter-end, an annualized return of 9.9%1.  This is virtually identical to the 10.1% return that the S&P 500 has produced over its 88-year history1.  Thus, an investor who invested in the S&P 500 at one of the most uncertain and scary times in history and stayed centered, even after a few initial kicks got past him, earned a very respectable return over the 6+ years that followed.

As always, we welcome your comments and questions.

Chuck Carroll
1 Source:  Dimensional Returns 2.2 Software
2  Bar-Eli, Michael, Ofer H. Azar, Ilana Ritov, Yael Keidar-Levin, and Galit Schein (2007), “Action  Bias among Elite Soccer Goalkeepers: The Case of Penalty Kicks,” Journal of Economic  Psychology, 28(5), 606-621.
All investment strategies have the potential for profit or loss. References to investment results do not represent the performance of TFO Phoenix, Inc. or any of its advisory clients.  Returns do not reflect the impact that advisory fees may have on performance.